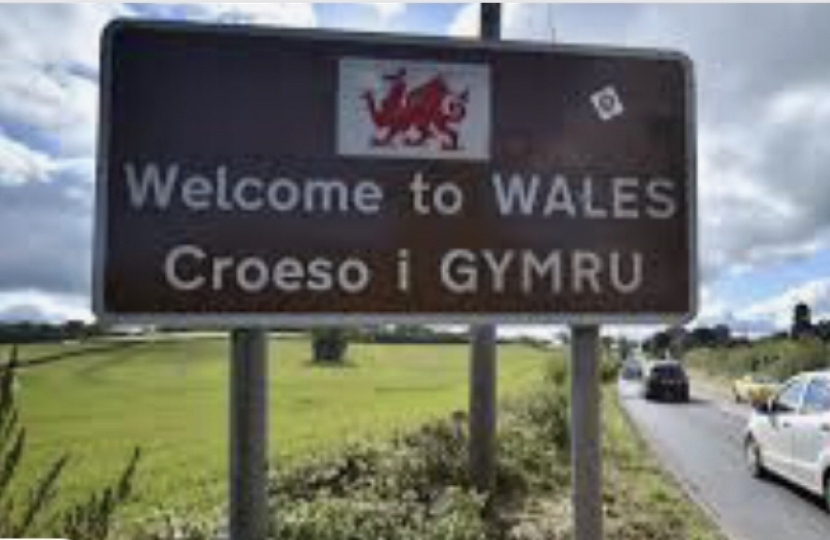 Vale of Clwyd MP Dr James Davies has backed a letter sent to the First Minister this afternoon seeking urgent clarification of issues arising from his announcement of travel restrictions on people visiting the country from UK Covid hotspots.

The letter, written by the Secretary of State for Wales, Simon Hart MP, also warns that the restrictions risk stirring division and confusion in Wales and states that businesses and residents across Wales and England are legitimately asking on what basis the First Minister believes they are proportionate.

James believes the First Minister’s apparent intentions are nothing more than a political statement which is unenforceable and will harm the people of North Wales and its economy.

The latest proposals follow on from the unpopular county boundary travel ban introduced a fortnight ago, which remains in place.

"There is a definite need for all of us to take action to stem the second wave of Covid in this country. The scientific evidence all points to the need to target indoor, crowded settings, where there is close contact for a prolonged duration. It does not justify an opportunistic political move to divide the citizens of the United Kingdom. We are, and should continue to be, all in this together - working jointly on testing, contact tracing, and efforts to develop a vaccine."

The letter to the First Minister, Mark Drakeford, states:

“Whilst you have committed to providing further details in due course, the uncertainty caused by this announcement requires urgent and thorough analysis. As far as the evidence you rely on is concerned: this, too, needs to pass scrutiny.

“I remain worried that, without rapid explanation, this approach risks stirring division and confusion in Wales. We both know that, in reality, communities in Wales are as hard-hit by Covid-19 as English, Scottish, and Northern Irish communities. Your recent comment about residents in West Wales being 'on the lookout for people who shouldn't be in those areas' is an example of exactly the situation we should be trying to avoid.

“I ask that you provide further detail about how this decision was made. I know we agree that we should proceed within a UK-wide framework that is broadly aligned. Further information about your decision will be helpful for the continuation of this shared understanding. It will also enable residents in Tier 2 and 3 areas in England to fully understand this change to the deliberately very simple advice they have been provided by UK Government — namely, not to travel outside their area unless for specific purposes, including travelling to work.”

The letter goes on to ask the First Minister a series of questions on; the basis for the decision, enforcement of it and its potential impact.

It also asks the First Minister to ensure that businesses and parents are given early notice if the Welsh Government decides to move to a 'circuit break' position.

James’s concerns regarding the travel ban, which creates a fourth variation of measures across the UK, are echoed by former North Wales Police Federation Chair, Simon Newport of Rhyl.

Simon said: “The First Minister is creating cultural and racial hatred issue with this proposal.

“I live in the UK and I am proud to be British and Welsh. I most definitely don’t want to see borders put up. It’s an outrage.

“Shame on the Welsh Government who are looking like they are enjoying playing politics with this virus. Maybe it is time to suspend devolution to tackle this awful crisis.”

“Despite now being retired, I am sure that my former colleagues will continue, as they have done throughout this whole pandemic, to safely do their utmost to serve and protect the people and communities in North Wales.

"The demands that the First Minister, Mark Drakeford has imposed on them, despite apparent consultation, will be difficult, if not impossible for them to enact.

"My former colleagues have more than enough to do in these unprecedented times with day to day matters and should not be used as political pawns by the Welsh Government and it should be remembered that Policing is not a devolved matter in Wales.

“My colleagues are servants of the Crown not servants to a political party."