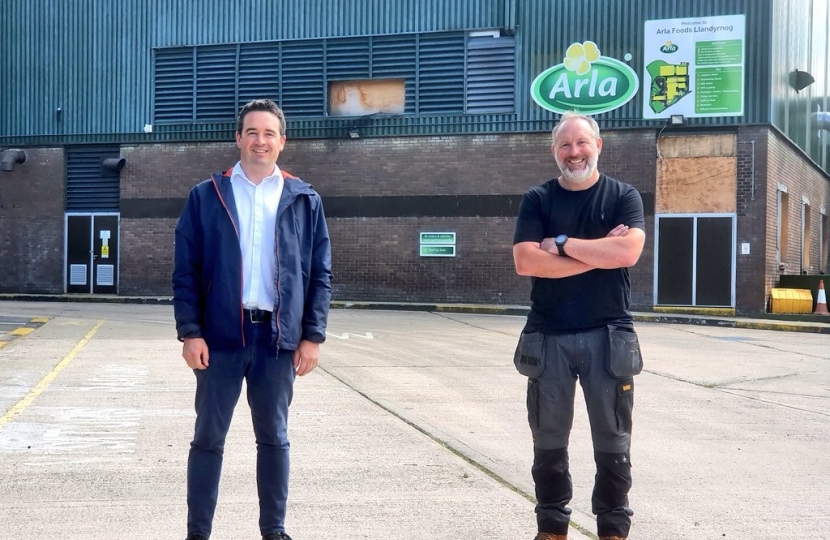 Vale of Clwyd MP Dr James Davies has welcomed the sale of a former cheese factory in Denbighshire and said the planned development of the site will give the area a real boost.

It was announced last week that the former Arla cheese-making plant in Llandyrnog has been sold to a company that processes pigments and additives for the construction industry.

Procter Johnson are relocating to the Llandyrnog site from their existing factory in Flint.

The dairy cooperative closed the creamery in Llandyrnog in 2018, with the loss of 97 jobs, following a “strategic re-evaluation” of Arla’s cheese operations.

Procter Johnson initially plan for around 40 jobs at the site.

“It is absolutely fantastic news that this empty site is to once again be used and I am delighted that it is a North Wales businesses that has acquired it.

“Procter Johnson is a successful, privately owned business which manufactures pigments and additives for the construction industry and has been operating on its current site in Flint since 1984.

“They have about a third of the UK market in this field and also export abroad, to locations including the Middle East and Central America.

“They currently employ 37 people but are hoping to expand this in the medium to longer term. The new site is about double the size of their existing premises so there is plenty of opportunity to do this.”

James added: “I first discussed the site with Harvey Jackson, the MD of Procter Johnson in April, and in recent days have met him on site to personally welcome the company to the Vale of Clwyd. I have offered to help them in any way I can.

“I am confident that the company will give the area a real boost and will be a great asset to Denbighshire.  I look forward to visiting again once they start operating from the site next Easter and wish them every success going forward.”