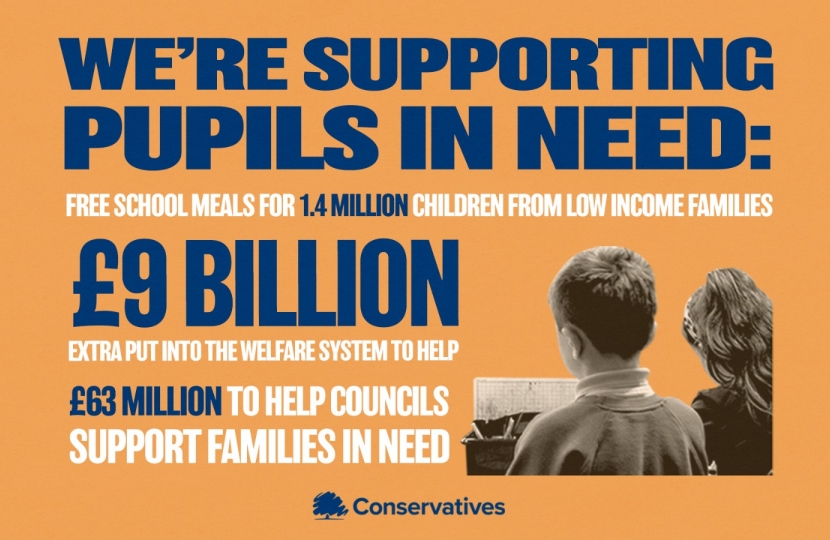 It is absolutely vital that no child should go hungry and I do not believe the government has been anywhere near good enough in explaining all it has been doing for vulnerable children and their families.

The UK Government supports 1.4 million children from low income families by way of Free School Meals in England. This number is an increase on previous levels of support following reforms to the benefits system. It is also spending £35m on the National School Breakfast Programme. The government has provided councils with a £63 million local welfare assistance fund during the pandemic to help support families in need - which the Trussell Trust has praised - and it has provided £16 million for food charities.

Over the course of the pandemic, the UK Government has put £9 billion extra into the welfare system to support families in need. Importantly, this includes an increase to Universal Credit of £1,000 per year for families. It has established an additional £1 billion catch-up plan to help schools provide more support to the most disadvantaged children. This is on top of the Pupil Premium - £2.6bn funding to reduce the attainment between rich and poor. Also, the government has provided nearly £1 billion of extra support for renters, by increasing local housing allowance rates for housing benefit and Universal Credit claimants to the 30th percentile of local rents, making it easier for people to rent. It has additionally provided a £500m Hardship Fund to support nearly 4 million people with council tax bills. These measures have come on top of the introduction of the National Living Wage, large increases to the income tax threshold and of course the Coronavirus income support schemes that have helped keep 9.2 million people in a job.

Opposition Day motions take place regularly, are non-binding, and routinely call for increased spending on a vast array of worthy causes. The government of the day has a duty to consider these and other demands on the public purse – including, for example, a request I have made this week as a member of the Health & Social Care Select committee for an extra £7 billion a year for social care, to address what I regard as major shortcomings.

These calls for funding need to be placed in the context of a dire set of public finances and existing funding commitments, following the pandemic, which will saddle all of us, and our children, with over £2 trillion in national debt. In particular, the government needs to have in mind the working poor, who often struggle to pay tax as it is, without further increases.

It is worth noting that, when Labour was last in Government, they also opposed extending free school meals into the holidays.

As a Conservative, I believe in freedom and responsibility for all. It should not generally be the case that schools need to provide meals when they are closed and it is unfair to suggest that the vast majority of lower income parents cannot and do not feed their children during the holidays. The government has designed Universal Credit so as to allow parents the dignity of feeding their own children when they are at home. This is supplemented by targeted local assistance, including via the £63m referred to above (and via equivalent sums given to Welsh Government).

It is important to remember that the government does also enable nutritious food and enriching activities through its Holiday Activities and Food Programme and the Breakfast Club Programme, benefiting several tens of thousands of disadvantaged children. Nutrition is something I invest considerable time in at Parliament, in the pursuit of policies to address our obesity crisis, through the Health Select Committee, All-Party Parliamentary Groups and ministerial meetings and private conversations.

I recognise this is a very worrying time for all. As the Chancellor’s announcement on Thursday showed, the government is listening to the country’s concerns and doing all it can to support the wellbeing and livelihoods of all. The government has provided an unprecedented package since the pandemic began of over £200 billion, and will continue to extend its offer as best it can to account for threats posed by the pandemic this winter.

Should you know or become aware of any families who are struggling to feed their children, I would be very grateful if you could contact me so I can assist them to access support available.