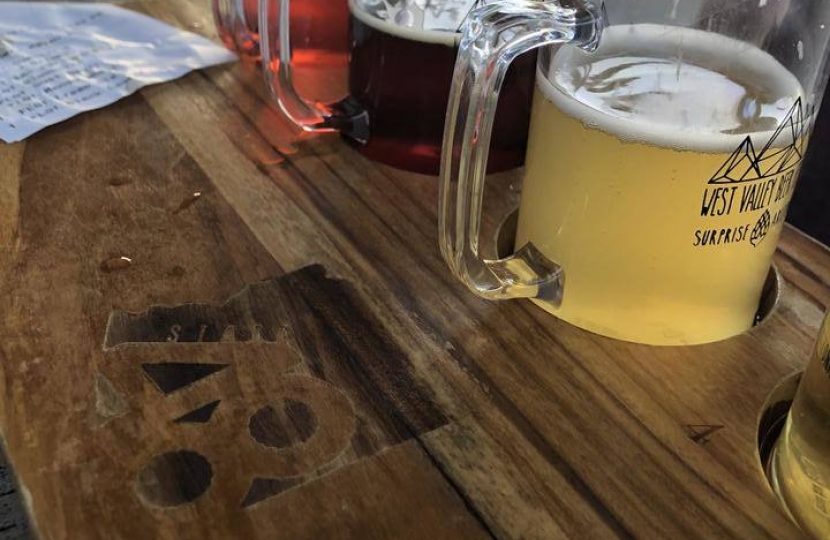 Vale of Clwyd MP Dr James Davies is backing pubs who are calling on the Welsh Government to provide them with more support and clear dates on when they can expect to reopen.

Publicans and operators in the area say they are at crisis point as they are not getting the financial support they need from the Welsh Government and have not been provided with a date as to when they can reopen their businesses.

The last grant for pubs in Wales covered the period up to the end of March, yet pubs cannot expect to reopen fully until May. Publicans, and the Welsh Beer & Pub Association, the leading trade association in Wales representing pubs and brewers, are therefore urgently calling for restart grants like those in England and Scotland to ensure their pubs can survive continued lockdown and reopen once more, and James is supporting their calls.

“Pubs are saying that the First Minister is not giving them enough financial backing, when compared to the support and clarity on reopening their counterparts are getting in England and Scotland, and I could not agree more.

“The past 12 months have been exceptionally hard for these businesses and sadly a great many are on their knees.

“Pubs in England are eligible for one-off grants up to £18,000 and have a roadmap to reopening, whereby they can open from April 12th at the earliest for outdoors service only, followed by indoors service not before May 17th. Full reopening without restrictions is anticipated from June.

“Here in Wales our pubs are in limbo. The grant they thought was to last them until the end of March, they have now been told needs to last until the end of May and whilst the First Minister suggested at the weekend that pubs may be able to open outdoors in late April, a date for a full reopening indoors remains unknown.

“They need a clear roadmap out of lockdown with adequate financial support until they can reopen. These businesses cannot simply reopen overnight; they have staff to organise and orders to make. To leave them without a date to work to is unjust and will result in the demise of some. I therefore urge the Welsh Government to listen to what these businesses are saying and to urgently act on their calls.”

“We need time to plan ahead but communication from the Welsh Government is poor, with no dates being provided for a reopening.

“The frustrating thing for us is seeing the help that pubs are receiving in England in comparison to what we are getting. As well as being a pub, we are also a nightclub, but we have received no grants at all for this side of the business.

“Over the past 5 months, we have received two NDR grants payments of £5,000 on each application. I expect from the new announcements that we should be receiving a further £5,000 in the next couple of weeks, however, this is all that has been made available.

“On March 19th it was announced that there is a new restart grant for those based in England, with eligible businesses in the hospitality, accommodation, leisure, personal care, and gym sectors entitled to a one-off cash grant of up to £18,000 from their local council

“Pubs in England have received a significant amount of financial support throughout this pandemic compared to those in Wales. We therefore want answers as to why we aren’t receiving the same financial support as those of a similar business and rateable value in England.”

Steve Gill, Landlord of the New Inn in Rhuddlan, said:

“It is very frustrating that we still have not been given a date and are hearing that people have booked places in Chester. We desperately need a roadmap as there’s lots to organise. We need to have a plan so we can order everything in; there is at least a two week lead on beer and we need to let staff know when they can return.

“Throughout this pandemic, pubs in England have had far more financial support. Here it has been very hit or miss. We have invested over £50,000 on outdoor pods and a play area so we can better accommodate people when we reopen, but have missed out on certain grants, such as the ERF 3. We applied but then it was shut down.  It has been a very challenging 12 months.”

Steve went on to praise last August’s ‘Eat Out to Help Out’ scheme and suggested a similar scheme should be run later in the year, in the quieter months of October and November, to help the hospitality industry recover.

“Welsh pubs are in limbo, with no clarity on when they can expect to fully reopen nor the financial support they need to continue to survive in lockdown.

“We will continue to work closely with the Welsh Government but our pubs and publicans in Wales are suffering, and cash reserves are rapidly becoming exhausted. If the First Minister wants to prevent pubs from falling at the final hurdle, we must have more support. We need a clear indication with dates on when they can expect to fully reopen, as well as great increase in the level of support they are getting to ensure they can hold on.”