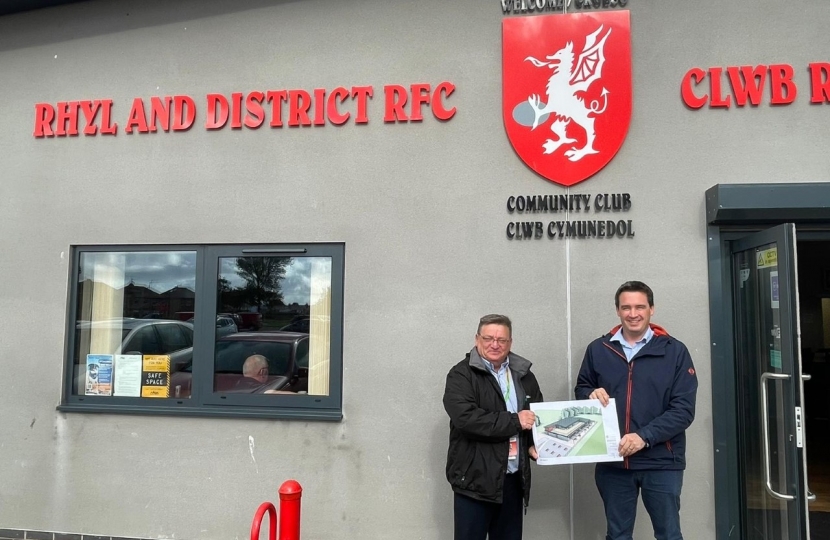 In recent months James has been liaising with the club over its exciting plans which involve adding a second floor to the building.

He recently visited the club to discuss the proposals further with those leading the project, and to advise them on potential funding opportunities.

“Since Rhyl Rugby Club moved to Rhyl from the Waen almost three years ago it has gone from strength to strength and is used by an array of local groups and organisations. It is also extremely popular with local residents for social gatherings.

“What the club has achieved during its short time in Rhyl is remarkable and all those involved deserve huge praise.

“They are now hoping to build on their success further and I fully support their ambition. I have been in regular discussion with them regarding the proposals, and have advised them of funding streams that may be available, and how they could be accessed.

“Rhyl Rugby Club is already a huge asset to the town and the extension they are proposing would vastly enhance it. I will continue doing all I can to help the club realise their goal.”

Dino Jones Davies, Director of Rugby at the club and Project Leader, said:

“There are currently 27 different groups that use the club on a weekly basis, from dance groups to widows and widowers. We also do a great deal for the disabled, including hosting a disco for adults with learning disabilities from across the county every Monday evening.

“Many more groups want to use the club, but we are at saturation point, which is why we want to build a third function room upstairs.

“We have the largest junior rugby section in North Wales with about 380 5-16 year olds, and are also used by other sports groups.

“We believe we are the biggest community project in the whole of Denbighshire. We are a not-for-profit organisation and everything we make is invested back into the club in some way.

“I think the club has really taken off because we provide a safe environment with a good car park – we are very accessible to everyone.

“We emailed James regarding our plans some time back, and the advice and communication from him and his office has been second to none.

“We have shown him the drawings and he seemed very impressed.

“If we can secure the funding, then we are confident we could get it up and running in 18 months. A second floor, with a balcony, would really give the place the ‘wow’ factor.”

As well as a second floor function room, the plans also include an indoor training barn, which would be situated at the back on the club and used for exercise and dance classes, and an extension to the car park.