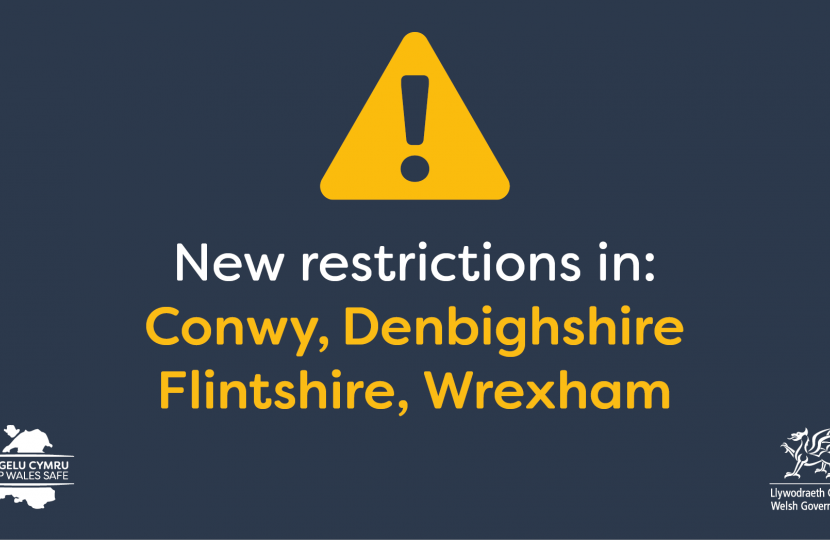 Vale of Clwyd MP Dr James Davies has emphasised the need for transparent data over Covid-19 case numbers in individual communities and settings following an upcoming two week review of restrictions in Denbighshire and other parts of North Wales which were introduced on 1st October.

James, who has questioned the need for the travel restrictions since they were first announced, last week spoke in the House of Commons of the negative impact they are having of people’s livelihoods and wellbeing and the need for scientific evidence to justify the decisions taken by the Welsh Government.

Raising the issue with Secretary of State for Health Matt Hancock MP, he said:

“Since last Thursday and the Welsh Government’s local lockdown measures, half a million people in north Wales have not been allowed to cross often meaningless county council boundaries without a good reason to do so.

“That is causing huge disruption to livelihoods and wellbeing, so will my right hon. Friend outline his understanding of the scientific evidence for restrictions on travel such as this?”

In his response, the Health Secretary referred to the fact when measures restricting out of area travel are brought in for communities in England, it is “done with strong guidance at the moment rather than within the law”.

Further to the English local lockdown tier announcements on Monday, only residents in Liverpool, which has an infection rate over five and a half times that of Denbighshire, are currently given such guidance.

Since the North Wales measures were announced by the Welsh Government, James’s office has been flooded with emails and calls from frustrated residents and business owners who are sceptical of the value of the restrictions and asking for hard evidence to show they are necessary (examples below).

“Whilst Covid-19 infection rates have risen across North Wales in September, and action is required, it is vital that the Welsh Government provides the evidence to justify the draconian travel restrictions they have imposed.

“There needs to be transparent data over case numbers in individual communities and settings and consideration of statistics from contact tracing as to the causes of infection outbreaks. It is clear, having carefully listened to briefings from senior UK Government scientists, that Covid transmission is occurring in enclosed and crowded places, where there is an extended duration of close contact between people. This does not need to implicate travel and tourism, and neither does it need to blame routine movement within our region.

“We are all tired of rules and restrictions and face an Autumn and Winter of ongoing public health measures. Sadly, limitations on the mixing of people indoors are very necessary but if political leaders are to continue to command the support of the general public, we need to ensure that all decisions taken are balanced, and bear in mind the harm caused as well as any protection.  Preventing cross-county border travel for the nearest shopping, for outdoor exercise or to see bubbled partners or close relatives is simply not justifiable.

“The measures that Cardiff has imposed on most parts of North Wales are harmful to mental health and risk mass unemployment, with all the problems this will bring.

“The Welsh Government needs to ensure that the local lockdown measures they implement relate to advice from the Joint Biosecurity Centre, so that they are proportionate and fair across the UK. This is so important when there is Treasury assistance which is based upon business closures relating to Joint Biosecurity Centre guided decisions.”

Some of the issues regarding the local lockdown measures which constituents have contacted James about: