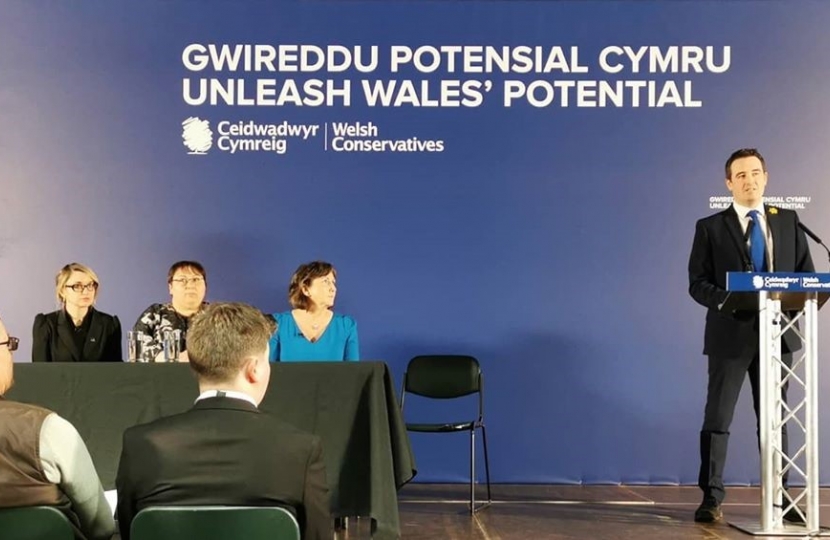 Vale of Clwyd MP, Dr James Davies, told a packed Welsh Conservative Party Conference on Friday that patients and clinicians in North Wales are being let down by a “systemic failure” within the North Wales National Health Service.

In his speech at Llangollen Pavilion, James, who has been a qualified NHS doctor for 16 years and between 2017-19, worked full-time as GP in Rhyl, Holywell and other areas, outlined failings within Betsi Cadwaladr University Health Board - which has been in special measures and under direct control of Labour Welsh Government for almost five years -  and said what he saw and experienced whilst working as a GP often shocked him.

He also expressed concern that there is still much confusion over who is responsible for health services in Wales, with many still not aware that they have been run by the Labour Welsh Government for over 20 years.

“Patients and clinicians are being well and truly let down by systemic failure within the North Wales National Health Service, and at a time when attention is focussed on Covid-19 Coronavirus, the prospect of some local services effectively coping with a pandemic fills many with great concern.

“Since I returned to Parliament, NHS issues have made up the greatest proportion of personal cases I receive – that’s 85 cases out of 271 so far. I believe other colleagues in North Wales face a similar postbag.

“Betsi Cadwaladr University Health Board, has been in special measures for nearly five years, under direct control of the Welsh Government, and yet there has been no improvement.

“The reality is that Wales receives £1.20 from UK Government for every £1 spent on public services in England and even after taking account of age and chronic illness among some communities in Wales, expenditure on the NHS in Wales is at least comparable with that in England.  Therefore what we are seeing in Wales is significantly worse performance and outcomes despite funding amounting to no less than other areas of the UK receive.”

James referred to the A&E waiting times at Glan Clwyd Hospital, which he described as “completely unacceptable”  and said ambulance services are also “a cause for great concern”, providing an example of a constituent in Prestatyn, with dementia, who had to wait nearly eight hours for an ambulance to arrive after experiencing a fall. He also highlighted excessive outpatient waits and inadequate primary care provision.

He said: “Apart from the inconvenience, dysfunctional health service provision leads to poor quality care and outcomes: heart attacks potentially not triaged or managed promptly; stroke patients not receiving timely scans or thrombolysis; and so often there is understaffing, and members of staff have to stay on late and enduring long shifts with barely a break.”

James praised all staff working in the North Wales NHS and said, despite all the problems, many patients still have good care thanks to their best efforts.