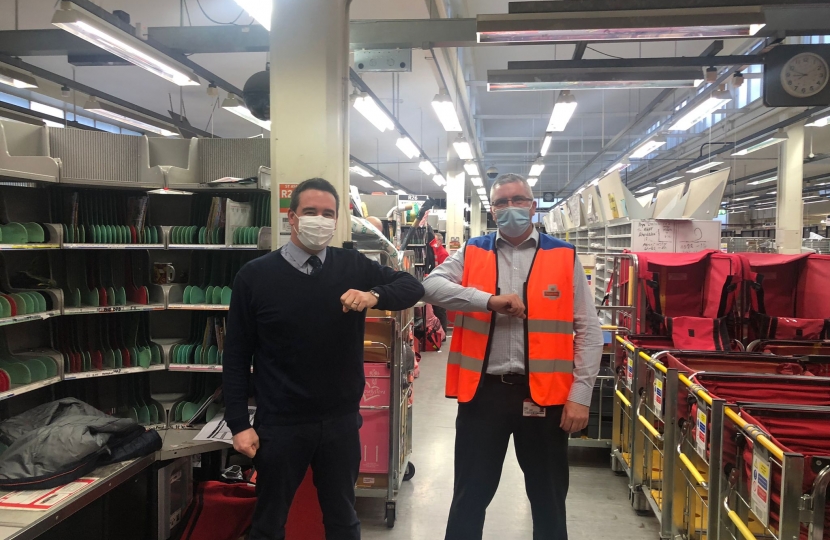 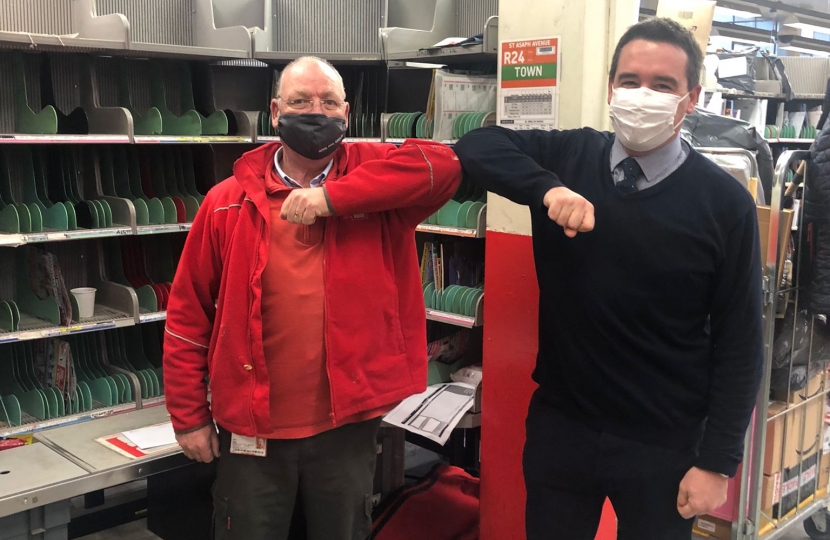 Vale of Clwyd MP Dr James Davies made an early morning visit to the Royal Mail Delivery Office in Rhyl on Friday to thank post men and women for their dedicated service.

James was given a guided tour of the office by Delivery Office Manager, Graham Simpson, and was introduced to the postmen and women, who will be pulling out all the stops to sort and deliver mail in the local area over the Christmas period.

The office, which deals with all post to Rhyl, Prestatyn, Kinmel Bay, Bodelwyddan, Rhuddlan, Dyserth, Abergele and surrounding areas is expected to deal with between 1.5 and 2m items over the Christmas period, and oversees approximately 60,000 items every day of the year, of which 15,000 to 20,000 are packets and parcels.

They are also now delivering parcels on a Sunday too.

Delivery routes usually take around 5 to 6 hours, with the post men and women covering a distance of around 10 miles a day. Prior to starting their routes, they spend several hours in the delivery office sorting the mail and putting it in the correct order.

“Whilst letter deliveries have decreased over the years, the number of packets and parcels we now deliver has risen substantially.

“We have been particularly busy throughout the pandemic with more people turning to online shopping.

“So far this year we are slightly quieter than previous Christmases and I think this is down to people going early. I think there is a slight nervousness following last year.”

Barry Ford, who has worked as a postman for almost 14 years, said the Christmas period can be "manic", with promotions such as Black Friday and Cyber Monday ramping up the volume of packages.

“It can be exceptionally busy leading up to Christmas, but to be honest we have been really busy throughout the year too, this year and last, due to the pandemic.

“When people see us out delivering, I don’t think many realise all the preparation that we do before we even start our deliveries.”

During his visit, James spoke to a number of the workers, including John J Kelly, who has been a postman for 43 years, and worked at the Rhyl office for 25 years.

“It was great to meet John and some of the other postmen and women based in Rhyl who are providing such a great service across much of the Vale of Clwyd.

“They have gone above and beyond throughout the pandemic and deserve much praise from us all.

“The role requires a huge amount of effort and dedication, with their having to deliver in all weathers, and it must have been particularly tough over the past few days.

“Our postal workers do such an important job at Christmas time and throughout the rest of the year and I would like to thank them for their efforts. I wish them all the best over the busy festive period.