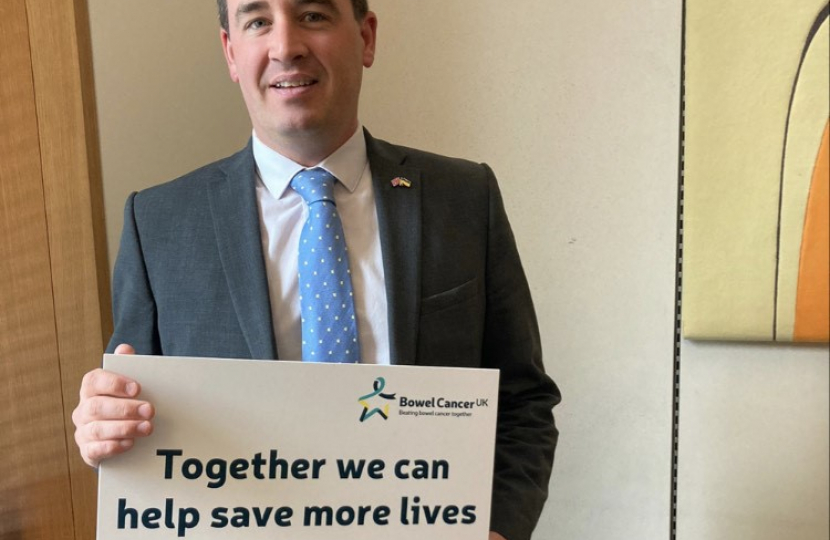 Vale of Clwyd MP Dr James Davies is helping to raise awareness of the signs and symptoms of bowel cancer after attending a Parliamentary drop-in event at Westminster this week, hosted by Bowel Cancer UK to mark Bowel Cancer Awareness Month.

Bowel cancer is the fourth most common cancer in the UK with nearly 43,000 people diagnosed every year. That means every 15 minutes someone is diagnosed with the disease. Sadly, more than 16,500 people die from the disease each year, making it the UK’s second biggest cancer killer – yet it is treatable and curable especially if diagnosed early. Nearly everyone survives bowel cancer if diagnosed at the earliest stage. However, survival drops significantly as the disease develops.

New findings released by Bowel Cancer UK for Bowel Cancer Awareness Month have revealed that more than four in ten (45%) people in the UK cannot name a single bowel cancer symptom. Early diagnosis is essential to improving bowel cancer outcomes and being able to recognise the symptoms and speaking to your GP when you feel something isn’t right, could save your life.

This year Bowel Cancer UK are calling on MPs to help raise awareness of the disease by sharing content on their social media channels and encouraging people to take part in the bowel cancer screening programme when sent the test in the post.

“I am really pleased to be working with Bowel Cancer UK to improve early diagnosis and access to best treatment and care both the Vale of Clwyd and nationally.

“Bowel cancer is very treatable but the earlier it’s diagnosed, the easier it is to treat. People whose cancer is diagnosed at an early stage have a much higher chance of successful treatment than those whose cancer has become more widespread.

“If you have any symptoms, don’t be embarrassed and don’t ignore them. Doctors are used to seeing lots of people with bowel problems.

“I can’t emphasise enough how important it is to seek help early, it really could save your live.”

The symptoms of bowel cancer can include:

Dr Lisa Wilde, Director of Research and External Affairs at Bowel Cancer UK, comments: “Bowel cancer remains the UK’s second biggest cancer killer, and it’s shocking that people aren’t aware of the symptoms to look out for. We’re delighted to have the support of James who attended our parliamentary event and who will help raise awareness of bowel cancer in the Vale of Clwyd.

“If you notice any signs of bowel cancer, or if things just don’t feel right for you, please visit your GP. While the disease largely affects people over the age of 50, more than 2,600 under 50s are diagnosed each year, so it’s really important people seek advice as soon as possible - whatever their age - if they’re worried.”