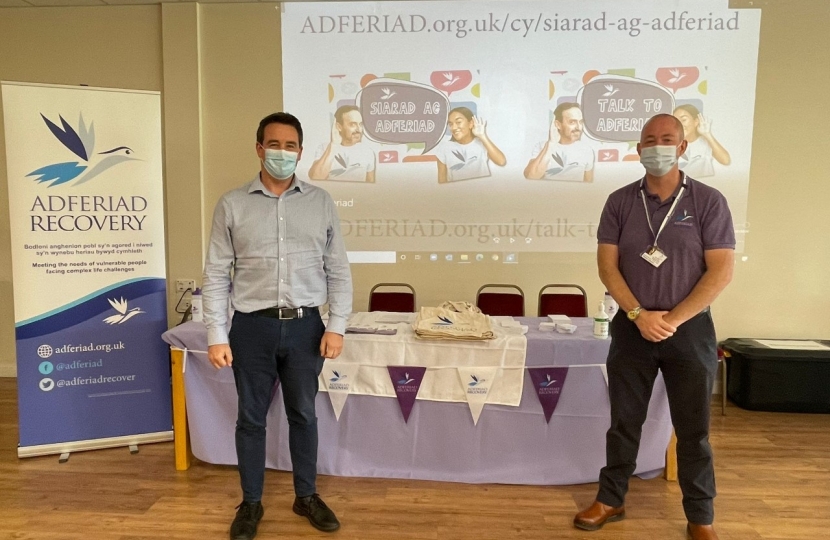 Vale of Clwyd MP Dr James Davies attended a consultation event last week to contribute his input into the future of charity Adferiad Recovery and to hear what stakeholders want.

Adferiad Recovery combines the skills and expertise of its founding charities to provide outstanding services for people in Wales with mental health problems, substance misuse problems, and those with co-occurring and complex needs.

After joining forces, the charity set about carrying out a huge consultation to establish what stakeholders want going forward.

As part of this process, last week the charity held an event at Rhyl Rugby Club, which James attended.

At the event, he was told that over 1,000 Adferiad Recovery stakeholders from across Wales - members, clients, carers, volunteers, staff, funders and supporters – have already had their say on what the new charity’s goals should be, what it should be campaigning for, and what they want from wider services in Wales and Lancashire.

Specifically, when asked what new services they wanted Adferiad Recovery to develop in the coming years, participants identified a priority for those which focus on befriending and social activities: a clear sign of the importance of getting people together in a post-COVID Wales.

“Adferiad Recovery is an ambitious new charity, pulling together all the individual strengths of the four pre-existing charities.

“The consultation has identified what stakeholders really want and also asked them what Adferiad Recovery should be campaigning for, and how it should be holding the Welsh Government to account. The priorities for campaigning were identified as: Gaining more resources for services; Improving waiting times; Ensuring a new Mental Health Act in Wales is implemented in as progressive a way as possible.

“Participants also identified a clear priority for working to reduce the stigma surrounding addiction, mental illness and co-occurring issues, and said that the charity should fight for an early intervention approach for all services in Wales.

“I was pleased to have the opportunity to take part in the consultation process and to hear of the charity’s exciting plans to further support people in the Vale of Clwyd, and beyond, with their excellent services. I wish the charity well and will support it in any way I can as it moves forward.”

“I want to say a huge thank you to everyone who took part in our consultation. Adferiad Recovery belongs to its members and other key stakeholders and the trustees and management will act on what they have told us.

“In the coming years we are going to shape our new charity in light of the priorities identified by the consultation: this will include the development of ambitious new services for people with co-occurring needs, tireless campaigning to reduce stigma, and active lobbying to improve the rights of our client group. Exciting times are ahead. Watch this space!”

A full report on the campaign’s findings will be published on the Adferiad Recovery site later this year.