MP meets with legendary dog in support of #FinnsLawPart2 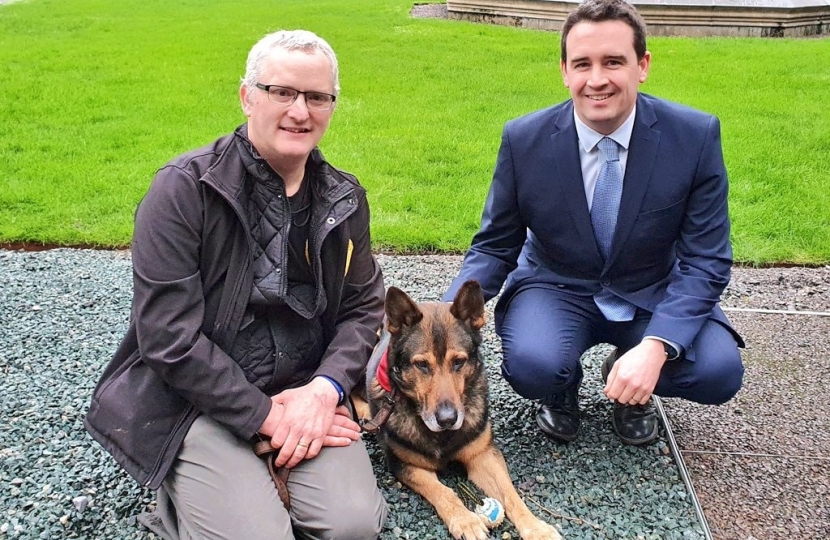 Three years on from Finn the police dog being stabbed through the lung in the protection of his handler, PC Dave Wardell, Vale of Clwyd MP Dr James Davies met with them both last week in support of #FinnsLawPart2 to increase sentencing for animal cruelty cases from six months to five years.

The Animal Welfare (Service Animals) Act aka #FinnsLaw was introduced as a Private Member’s Bill by PC Wardell’s MP Sir Oliver Heald and it became an active law on 8th June 2019.  The legislation makes it harder for those who harm service animals to claim they were acting in self-defence.

There have since been a number of convictions using #FinnsLaw. However, during the early stages (back in November 2016) Finn & Dave were promised that there would be a second part to #FinnsLaw to increase the sentence for animal welfare/cruelty cases from six months to five years and they are now pushing for this to happen.

James met with them both last week to support their quest.

“It was a great pleasure to meet Finn last week and his owner Dave who have both become legendary across the UK, not only for their part in getting #FinnsLaw introduced, but also for their appearance on Britain’s Got Talent.

“Clearly, no law-abiding person wishes to see service animals injured in the course of their duties and it is therefore reassuring that they are now better protected thanks to #FinnsLaw (in England & Wales). However, I agree that the sentencing should be increased.

“As Dave himself said “#FinnsLawPart2 looks to give #FinnsLaw and the Animal Welfare Act teeth” as it will see a substantial increase in the maximum sentences from 6 months to 5 years."

“What Finn endured three years ago was incredibly upsetting. It is therefore vital that we do everything we can to prevent further cases like this and I'm confident that increasing the sentencing would be an effectual deterrent."