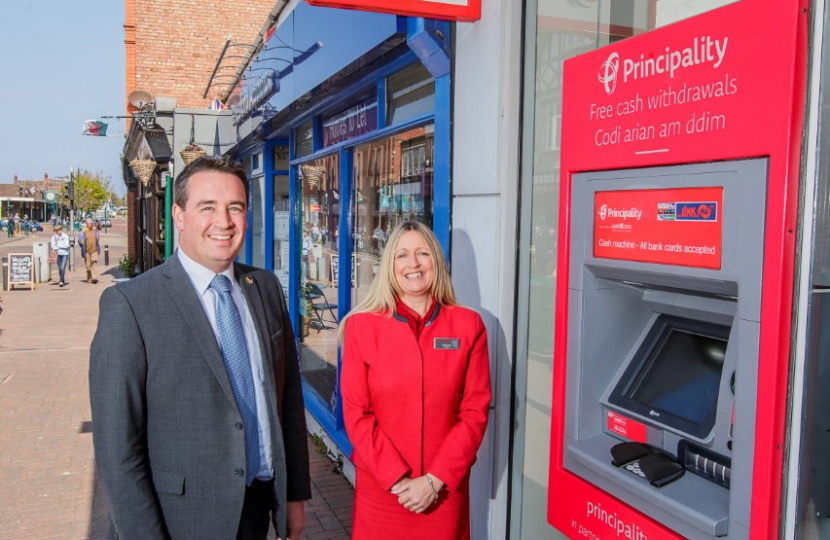 Vale of Clwyd MP Dr James Davies, who has been leading a campaign to see the reintroduction of cash machines in Prestatyn, is delighted that Principality Building Society has installed a new ATM at their premises in the town centre.

Last week James officially opened the new ATM at Principality’s branch on the High Street, which boosts free access to cash in the town.

“When it became clear in January of last year that Barclays and HSBC were to close their Prestatyn branches, and remove the final two ATMs in the High Street, I asked the town’s Principality Building Society Branch Manager Debbie Luke whether she could help.  She kindly got in touch with the society to try to move forward with plans for a new external cash machine on their premises.

“Shortly afterwards, I liaised with cash machine network company LINK, as well as ATM providers, including Notemachine, Cardtronics, PayPoint and YourCash.  I also contacted local shops, encouraging them to consider hosting a cashpoint, and worked with the Town Council over other potential approaches.

“In October, I launched a public campaign to see the reintroduction of cash machines in Prestatyn High Street.  The aims of that campaign have now well and truly been met, with new free-to-use Cardtronics machines at Principality Building Society, at Jenny’s (130 High Street), and at Meliden Road Post Office.”

“Cash is still important for many residents and companies, especially the independent businesses in Prestatyn town centre, and the new machine at Principality is extremely welcome.  I am confident it will be well-used and I now plan to continue my efforts to secure a new banking hub for the town.”