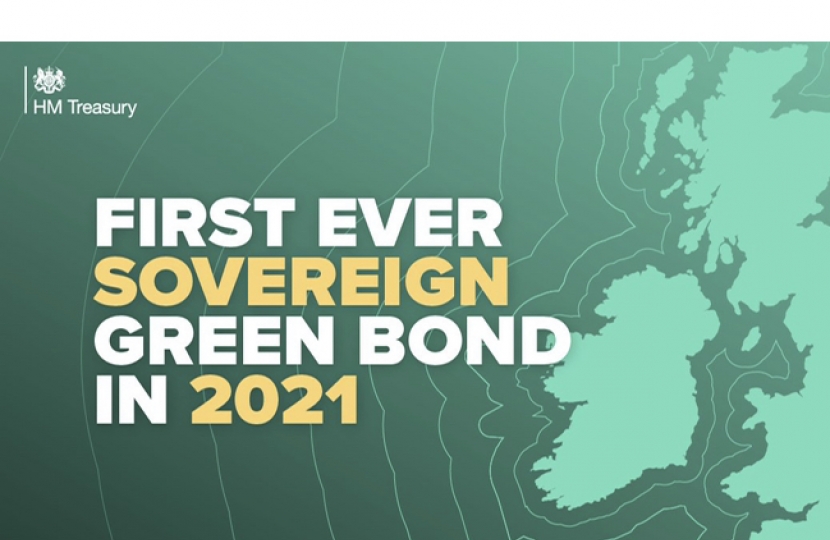 Following last week’s announcement by the Chancellor of the Exchequer, Rishi Sunak, that the UK will issue its first sovereign green bonds in 2021 as part of the economic recovery from coronavirus, Vale of Clwyd MP Dr James Davies has welcomed the news and questioned him over their benefits for North Wales.

Green sovereign bonds are a form of borrowing by governments to fund low-carbon infrastructure projects and are already used in 16 countries including Germany and Sweden.

The Chancellor has said the bonds will help the UK meet its 2050 net zero target and other environmental objectives.

James questioned the Chancellor over the bonds, when responding to his Statement in Parliament on the Future of Financial Services.

“I very much welcome my right hon. Friend’s statement, particularly in terms of the issuing of green gilts. Will he confirm that the benefits of the sovereign green bond will be available alongside revenue support mechanisms to support hydrogen production and carbon capture and storage, as exemplified by the HyNet project for north-west England and north-east Wales?”

HyNet North West is a regional project that will play an essential role in decarbonising the economy and put the region on the map for clean energy innovation. It will see the production of hydrogen from natural gas, with the released carbon being pumped into former gas and oil fields in Liverpool Bay.

The Chancellor said he could not comment on specific projects, but said James was right to highlight some of the areas of interest to the Government.

“As the Chancellor has said, the UK Government wants to "renew the UK's position as the world's preeminent financial centre" following Brexit, and these green bonds are pivotal to achieving that.”