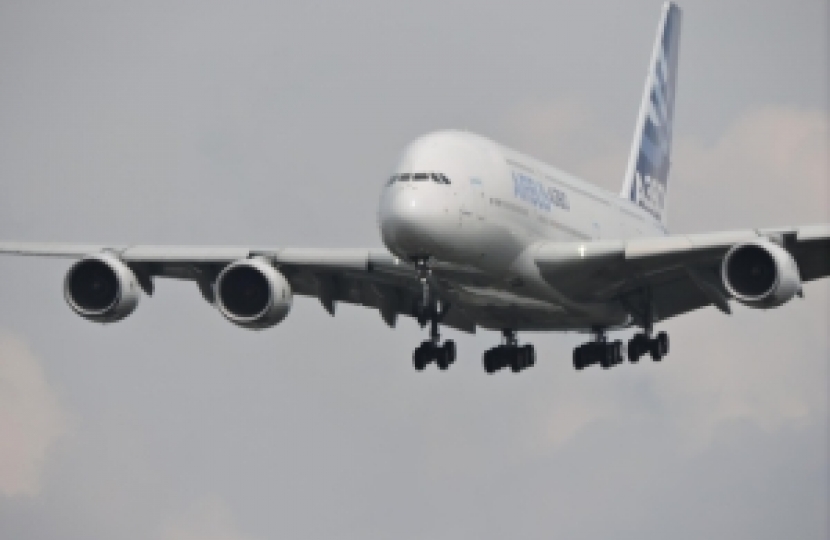 Following last week’s announcement of job losses at Airbus in Broughton, Vale of Clwyd MP Dr James Davies has this week raised the matter in the House of Commons and asked what further action the UK Government can take to support the company.

Last Tuesday Airbus revealed plans to make 15,000 redundancies worldwide, including 1,700 in the UK. They later announced that 1,435 of the redundancies would be at its site in Broughton, near Chester.

The UK Government has already provided £6bn in sector-specific support and is in constant dialogue with Airbus directly on a range of issues to better position them for the future. During ‘Wales Questions’ in Wednesday’s House of Commons proceedings, James asked what further action the UK Government can take to assist the company.

He said: “Economic recovery in North Wales will be made all the harder by the devastating news that Airbus in Broughton is to shed 1,435 jobs. I know the UK Government are already supporting the UK aerospace industry significantly, but can the Minister confirm what further the Government can do to assist Airbus?”

“I can confirm that when I and my right hon. Friend spoke to the leaders of Airbus last week, they were very grateful to the UK Government and said that the UK Government had been one of the most supportive Governments in the world, which is why, no doubt, the numbers of jobs being lost in the United Kingdom is far fewer than in other European Union countries.”

He also referred to the £6bn UK Government support and said that the “Government will want to continue to support the aerospace sector.”

Speaking afterwards, James, who along with his fellow Conservative MPs from North Wales, has been working with officials from the Department for Business, Energy and Industrial Strategy (BEIS), the Minister for Business and Airbus management, since last week’s announcement, added:

“The Broughton Airbus site has been a key part of the life and the economy of North East Wales for many years and last week’s news was truly devastating for all who work there, their families, and supply chain workers in the wider region. It is therefore vital that we do everything possible to mitigate the impact of Covid on the business.

“The UK Government has been extremely supportive of the aerospace sector to date and I welcome the Government’s commitment to continuing this support.

“In the meantime, North Wales Airbus workers can rest assured that I will continue fighting their corner and meeting with ministers and officials from BEIS and the Treasury to discuss plans and options which would work toward reducing the number of jobs at risk at the Broughton site.”

New statistics showing the huge Government support to individuals and businesses in the Vale of Clwyd have been welcomed by local MP Dr James Davies.