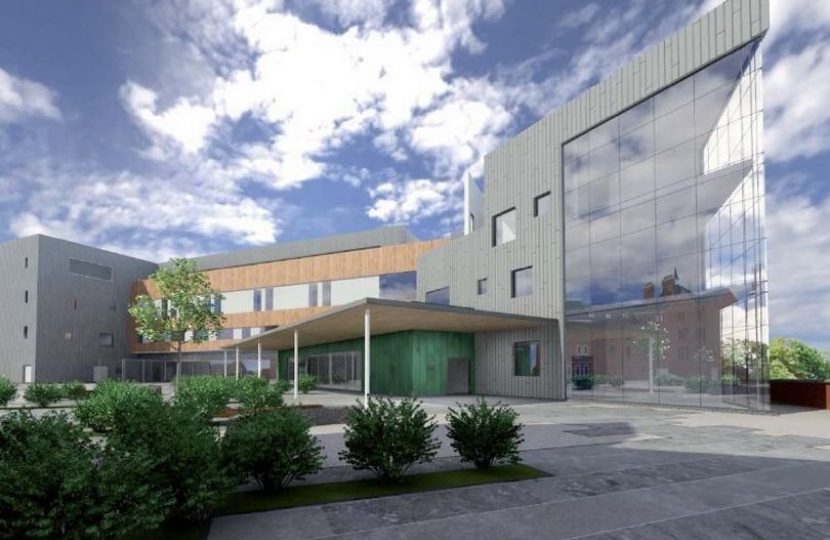 Vale of Clwyd MP Dr James Davies is in “strong support” of the plans for new community hospital facilities in Rhyl, but has expressed concern at the slow progress of the development and called for the concerns of residents living close by to be addressed.

In his response to the pre-application consultation on the proposed North Denbighshire Community Hospital,  James welcomes the fact that the Royal Alexandra Hospital site is more accessible than Glan Clwyd Hospital for many living on the coast, calls for the site to retain its current name, and states that it “has the potential, following sympathetic renovation, to significantly contribute towards the portrayal of a resurgent town.”

He also refers to the various concerns regarding the development which have been raised by residents living close by and calls for these to be addressed.

“It is quite clear that Ysbyty Glan Clwyd is struggling to cope with current demand – from the Emergency Department and inpatient bed numbers, through to car parking spaces.  New community hospital facilities can relieve some of this pressure.

“I welcome the fact that the plans for Rhyl include a minor injury unit, inpatient beds and outpatient services.  Nevertheless, it is regrettable that progress on this matter has been so slow, particularly in view of the loss of other community hospital facilities locally in recent years.

“The Royal Alexandra Hospital site is more accessible than Ysbyty Glan Clwyd for a large cohort of residents along the coast, including the elderly and those living in deprived communities.  I therefore favour the intention to develop the facilities at this location.

“The Royal Alexandra Hospital also forms a key element of Rhyl’s history.  At the time I was born, it was still the area’s district general hospital, where my father was working, until the new Ysbyty Glan Clwyd was opened just a few months later.  For my family and many others, the hospital holds many memories and I believe the new and modernised facility should retain its current name.

“The original hospital building is Grade II listed and nearly 120 years old.  While already a key feature along Rhyl Promenade, it has the potential, following sympathetic renovation, to significantly contribute towards the portrayal of a resurgent town.”

“I approve of the indicative new-build façade, interior design and landscaping concepts as set out within the documentation you have provided. These suggest a quality development and I am pleased to see consideration has already been made to ensure the design takes into account those living with dementia.

“I have been contacted by local residents neighbouring the site and I would be grateful if you could take on board their comments and address these as far as possible.

“Their concerns relate to the demolition and construction phase and also to the impact of the siting of two wind turbines;  parking facilities; increased traffic; noise and other matters.

“I believe that residents have raised these issues directly with you, but I would ask that you kindly let me have sight of your response to these matters.”

Plans for the new hospital and refurbishment of the Royal Alexandra Hospital will now be submitted to Denbighshire County Council.