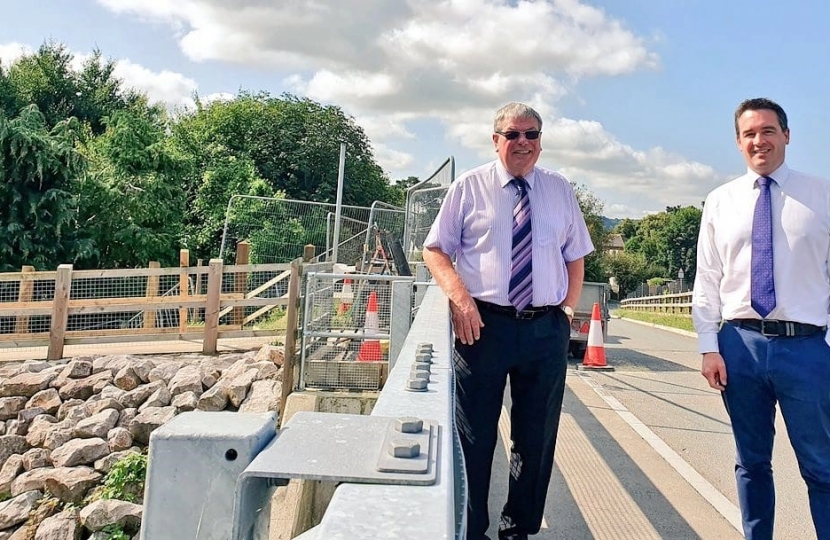 Lobbying efforts by politicians and residents to ensure that a St Asaph housing estate is better protected from flooding have paid off, with Natural Resources Wales (NRW) committing to complete additional works to reduce risk.

Vale of Clwyd MP Dr James Davies has been working with St Asaph County Cllr Peter Scott and residents of Roe Parc to reduce the risk of the estate being severely affected by flooding in the future.

In the 2012 floods, Roe Parc, a residential area of 54 properties located downstream of the A55, was badly hit due to raised defences being overtopped.

A programme of works to reduce flood risk has been carried out in St Asaph since that time, but, although those defences worked well during last year’s Storm Ciara, there was still the need for the urgent placement of sandbags to prevent overtopping at either end of the wall behind the estate. Since that time James, Cllr Scott and residents have been pushing for further improvements to protect the estate.

James is therefore delighted that NRW have now committed to carrying out some works at the southern end of the Roe Parc defences. This is in addition to improvements at the northern end, and to an opposite embankment adjacent to the Spring Gardens Caravan Park.

“Every time there is bad weather residents living on Roe Parc fear the worst.

“Their homes were ruined in the 2012 floods and obviously they never want to have go through that again.

“They have therefore been lobbying hard and Cllr Scott and I have also been putting pressure on NRW to complete these works, so it is fantastic that all our efforts have finally paid off.

“At the southern (A55) end, NRW are proposing soft engineering works comprising of a bund of earth for a length of around five metres. They are also top-soiling the exposed face of the river bank over a distance of around 30 metres to replace soil that was washed out during the event. This will be re-seeded to improve grass cover and will be marginally proud of the kerb edging on the path.

“The dimensions involved are small but would alleviate the issues encountered during Ciara, to bring that location up to the standard of protection of elsewhere along the stretch.

“The defences were designed for a 1 in 200 year event.  My understanding is that after the current works have taken place, they will essentially protect Roe Parc against a 1 in 250-300 year event (given that Ciara was reportedly of this level of severity).  This will provide St Asaph with significantly enhanced protection as compared to pre-2018 and provide residents with peace of mind.

“I thank NRW for listening to our concerns and for acting on them and I look forward to seeing the works completed.”

"I am very pleased NRW are now committed to carrying out remedial work that was highlighted during Storm Ciara. We will continue to monitor the situation during the forthcoming months”