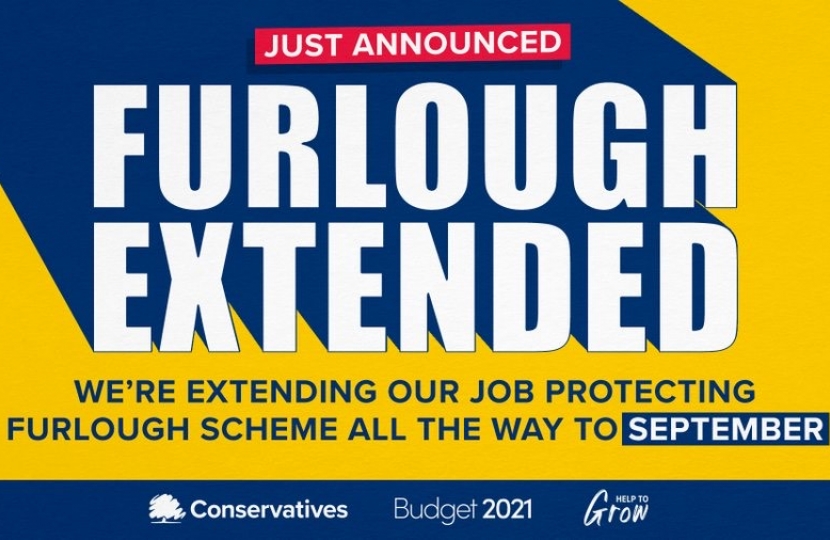 Chancellor of the Exchequer Rishi Sunak has announced a lengthy list of measures in the Budget which will provide immediate and long-term benefits for North Wales. Vale of Clwyd MP Dr James Davies has welcomed the financial plan worth millions of pounds to the region.

The most significant section of the Budget statement addressed the Government’s ongoing response to Covid-19. Whilst the vaccine rollout is continuing, public health and economic indicators suggest that some of the most immediate challenges of the pandemic are set to remain.

The furlough scheme, which has protected 2,700 jobs in the Vale of Clwyd, has been extended until the end of September. Similarly, the Self-Employment Income Support Scheme will distribute a further two grants. As the tax returns deadline for 2019/20 has now also passed, the Chancellor confirmed that the newly self-employed will be eligible for both grants.

Rishi Sunak also announced that the Working Tax Credit and Universal Credit uplift will be maintained for a further six months.

Businesses in North Wales, particularly those in the hospitality and tourism sectors, have been hard hit during the pandemic. As a form of direct support, the Chancellor has announced that the 5% VAT level will remain for six months before slowly increasing to pre-pandemic levels by April 2022. Rishi Sunak also committed to introducing a Business Recovery Loan Scheme for all sectors, which will make loans of between £25,000 and £10 million available. Following lobbying efforts from Dr James Davies MP, beer duty has also been frozen for 12 months.

The cultural and artistic sector in England will benefit from a £700m fund announced at the Budget which will be administered by the Department for Digital, Culture, Media and Sport. Welsh Conservatives, including Dr James Davies, have already called such allocations to be replicated in Wales by the devolved administration, using funding made available through Barnett Consequentials.

For those who have been looking to get onto the property ladder, the Chancellor announced a 95% loan-to-value mortgage guarantee which high-street banks will begin to offer in a few weeks.

In addition to the measures which have been introduced to insulate people from the impacts of the pandemic, the Chancellor maintained his commitment to those on National Living Wage, increasing the hourly rate to £8.91 from next month.

“This comprehensive package of support will provide local businesses and individuals the certainty they need to survive the coming weeks and look beyond the pandemic with confidence.

“A key pillar of the Chancellor’s support package is £18,000 re-opening grants to help get our retail, hospitality, leisure and personal care businesses going again, together with an extension of the business rates holiday. To ensure that local businesses are not left behind at the most crucial part of our economic recovery, the Welsh Government must therefore commit to match this support.

“I have been contacted by people moving in the Vale of Clwyd who are worried that they will miss the stamp duty cut off – the Chancellor has now pushed back the deadline in England by three months, followed by a tapering over a 12 week period, and the First Minister must do the same with SDLT.”

The second area on which Rishi Sunak focussed was the national public finances. In addition to planned changes to the tax system in 2023, the Chancellor outlined a bold plan to boost the economy and recover some of the £407 billion that has been spent so far on the Coronavirus response. As part of his package of measures, the Chancellor introduced a ‘Super Deduction’ of 130% for capital investment. In practical terms, this means that when a company spends £1,000 on new machinery, their tax bill will be reduced by £1300. There is no ceiling and are no sector-specific criteria for this relief.

Finally, the Chancellor used his Budget statement to outline plans for the future of the UK economy.

As Chair of the Mersey Dee North Wales All-Party Group, James used pre-Budget consultation with the Treasury to promote regional interests. Following today’s announcements, the North-Wales Growth Deal will be reprofiled, bringing funding forward from 15 years to 10. This will mean an extra £4.4 million per year from 2021/22 for nine years. This investment will create 3,800 new jobs and deliver a £2.2 billion boost to the local economy.

Denbighshire County Council is additionally a direct beneficiary of the Budget, receiving £125,000 of capacity funding in relation to the Levelling-Up Fund and an additional £20,000 for similar purposes as regards the UK Community Renewal Fund ‘Priority Places’ programme. These programmes open up the possibility of tens of millions of pounds of support for the county within the next year or so, as part of efforts to promote local regeneration and infrastructure projects. James has already been in contact with Local Councillors to discuss the opportunities ahead.

Rishi Sunak also announced the creation of a UK Infrastructure Bank and a new Freeport in the Liverpool region, which is expected to benefit the Vale of Clwyd.

Speaking after the Chancellor’s Budget statement in the House of Commons, James said:

“I am delighted that this Budget delivers for North Wales.

“In addition to the extension of universally supported income and business assistance packages, the Chancellor has invested in our future.

“As a result of today’s announcements, the Devolved Administration will receive £740 million in Barnett consequentials, bringing the total funding from the UK Treasury up to £7.9 billion. The Chancellor has done all that he can to provide assistance and clarity to my constituents, and the First Minister must now do the same.

“I look forward to working with the Chancellor, local leaders and business representatives to ensure that the Vale of Clwyd makes the most out of the opportunities which have been presented today.”

On Social Media, the Secretary of State for Wales, Simon Hart MP commented:

“This budget delivers for every part of Wales & paves the way for brighter times ahead. Whilst being honest about our finances, the UK Government continues to support Wales through this crisis & beyond. The strength of our Union has never been more important.”