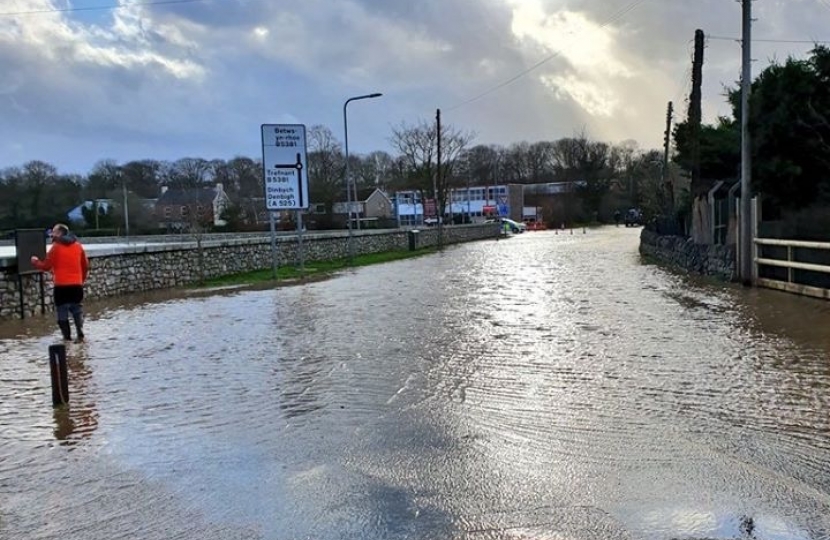 In the aftermath of Storm Ciara, Vale of Clwyd MP Dr James Davies has vowed to speak to all relevant authorities about any alterations needed to St Asaph’s new flood defences.

James was on-site in St Asaph and Rhuddlan during Sunday's bad weather to check on the impact of extreme swelling of the Rivers Elwy and Clwyd.

He was largely impressed by the new defences in St Asaph, but spoke of action needed to protect the area further in the future.

Speaking from St Asaph on Sunday afternoon, he said:

"The new hard defences within St Asaph are largely doing their job, albeit not by a large margin.

"The main concern currently relates to the function of the culvert at the Lower Denbigh Rd/Glascoed Rd junction, with flow of water onto the road. There is also some over-topping of softer defences adjacent to fields, with flooding of the A525 Rhuddlan - St Asaph.

"Sadly some flooding of properties is inevitable but the new defences appear to have averted major disaster. I will be speaking to the authorities about any alterations needed to the culvert and other lessons to be learned".

He added: “It has since become apparent that a number of homes were flooded and my thoughts are with all those affected at this distressing time.”

James also praised all those involved in managing the situation.

He said:  “The emergency response on the ground was incredible and I pay tribute to the work of all those involved in managing the situation".