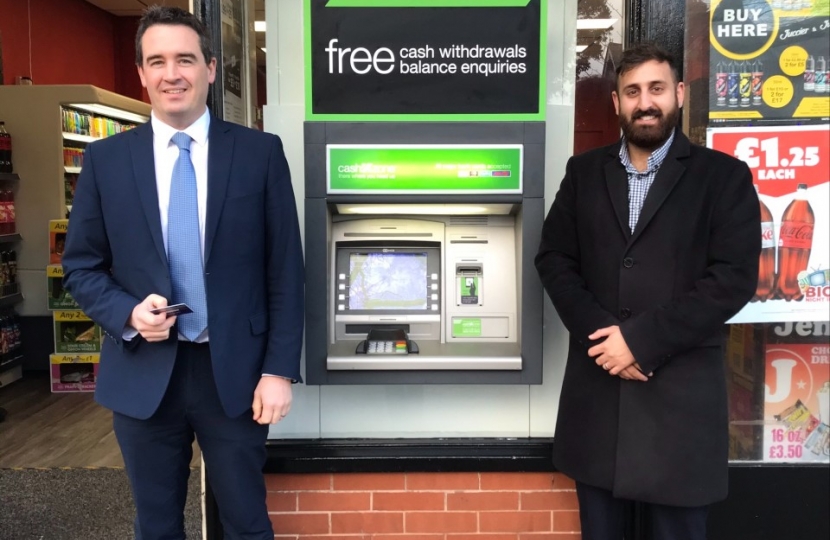 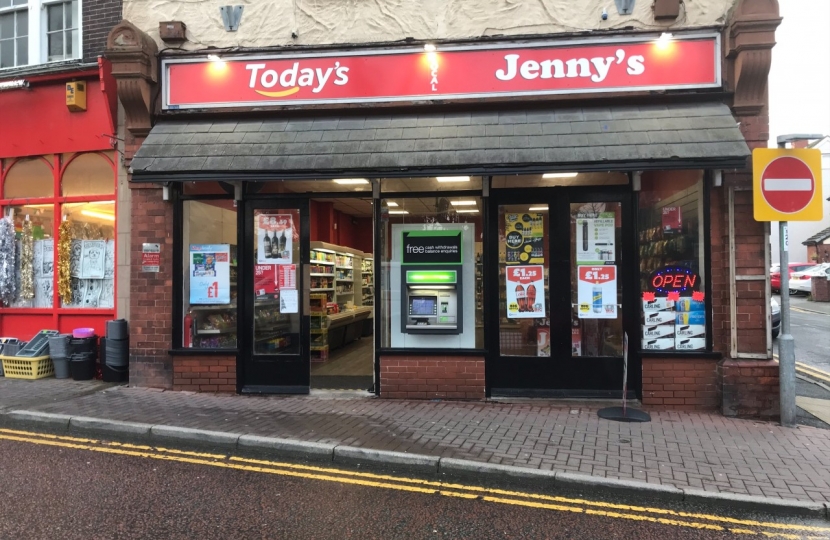 Vale of Clwyd MP Dr James Davies, who has been leading a campaign to re-introduce cash machines to Prestatyn High Street, is delighted that a new ATM was switched on yesterday (Thursday), with another set to arrive early in the New Year.

Following the rapid closure of banks throughout the town, James has been liaising with the banks, the cash machine network company LINK, as well as ATM providers, including Notemachine, Cardtronics, PayPoint and YourCash in a bid to get cash machines back into the High Street.

He also contacted local shops, encouraging them to consider hosting a cashpoint, and liaised with the Town Council over other potential approaches.

He is therefore delighted that Cardtronics have this week switched on a new cash machine at Jenny’s, 130 High Street, and will be installing one at Principality Building Society in the New Year.

“Cash is still important for many residents and companies, especially the independent businesses in Prestatyn town centre, so it is little wonder that I have received so much support for my campaign.

"The rapid closure of Prestatyn’s bank branches was resisted by many and I spent a great deal of time with each, encouraging them to reconsider. When this fell on deaf ears, I proposed that they should at the very least ensure the continued presence of their High Street cashpoints. However, even that was deemed impossible due to property ownership issues.

“I would like to thank Cardtronics for the instrumental role they have played, and continue to play, in ensuring that both local residents and visitors to Prestatyn will now once again have easy access to cash.

“Also thanks to Jenny’s for agreeing to have the machine at their premises, and all those who have supported my campaign, helping to demonstrate the strength of feeling on this issue. I am delighted that common sense has prevailed.”

"When it became clear in January of this year that Barclays and HSBC were to close, and remove the final two ATMs in the High Street, I was in discussion with Principality Building Society who were already looking into installing a ATM within their premises frontage to continue to serve the community in Prestatyn. It is great news that this is set to come to fruition in the near future also."

“I am continuing to engage with Ministers in the Treasury over the potential for banking hubs in towns such as Prestatyn and also recently had a meeting with Philip Bowcock, CEO of Notemachine, to discuss the situation in Prestatyn.”

“We are delighted to be able to provide access to cash for the people of Prestatyn. Cash remains a vital part of our economy, and it is important that the community retains the ability to access cash and use it to pay for things. Up and down the country, communities like Prestatyn are struggling to access cash – it’s time for action to protect citizens’ rights to choose how they pay before our ATM network is irreparably damaged.”