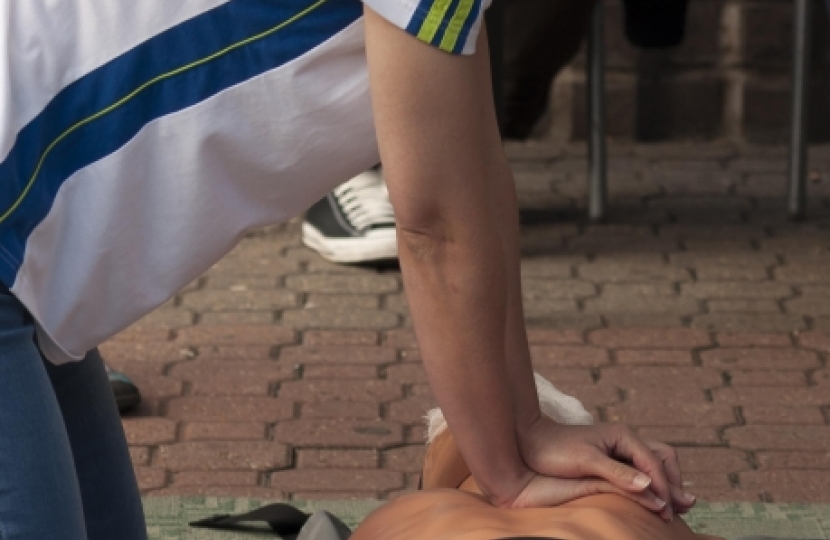 Vale of Clwyd MP Dr James Davies and Welsh Conservative colleagues from both Westminster and Cardiff Bay, have jointly signed a letter calling on the Welsh Education Minister to make the teaching of CPR, and other lifesaving skills, compulsory in the new Curriculum for Wales.

The group are urging the Welsh Government to include the teaching of cardiopulmonary resuscitation (CPR), and other essential lifesaving skills, in the new Curriculum for Wales. This follows a significant amount of work on this issue from Shadow Education Minister Suzy Davies MS, and a recent constituency surgery meeting between Delyn MP Rob Roberts and the family and friends of Janene Maguire of Mold, who have been leading their own campaign after Janene sadly passed away following a cardiac arrest. Her daughter suffered a sudden cardiac arrest 20 years later but was saved by a friend who was trained in first aid and able to perform CPR until paramedics arrived.

“We are calling for CPR and other lifesaving skills such as the use and purpose of defibrillators to be included in the new Curriculum for Wales, making it compulsory for all secondary schools to teach these essential skills, just as it is in England and Scotland. It is simply not acceptable that children in Wales are being deprived of the opportunity to learn such vital skills which will equip them with the confidence and knowledge to assist in future medical emergencies.

“Sadly, there are around 30,000 "out of hospital" cardiac arrests each year across the UK, with fewer than 1 in 10 of those surviving. Yet the outcome of these distressing situations can be changed for the better, with evidence suggesting that if all young people were trained with lifesaving CPR skills, nearly 1 in 4 could survive.

“In other countries where CPR has been taught in schools for many years, cardiac arrest survival rates are more than double those of the UK — with Norway's survival rates being as high as 25%. This suggests that investing in the teaching of these skills will directly help save lives and ensure that there is not a disparity in the survival rate of out of hospital cardiac arrests between Wales and the rest of the UK.

“With the new Curriculum for Wales currently being developed and prepared to be implemented in schools from September 2022, now is the ideal time to implement this change into the curriculum and require secondary schools in Wales to teach CPR training.”

Chancellor of the Exchequer Rishi Sunak has announced a lengthy list of measures in the Budget which will provide immediate and long-term benefits for North Wales. Vale of Clwyd MP Dr James Davies has welcomed the financial plan worth millions of pounds to the region.