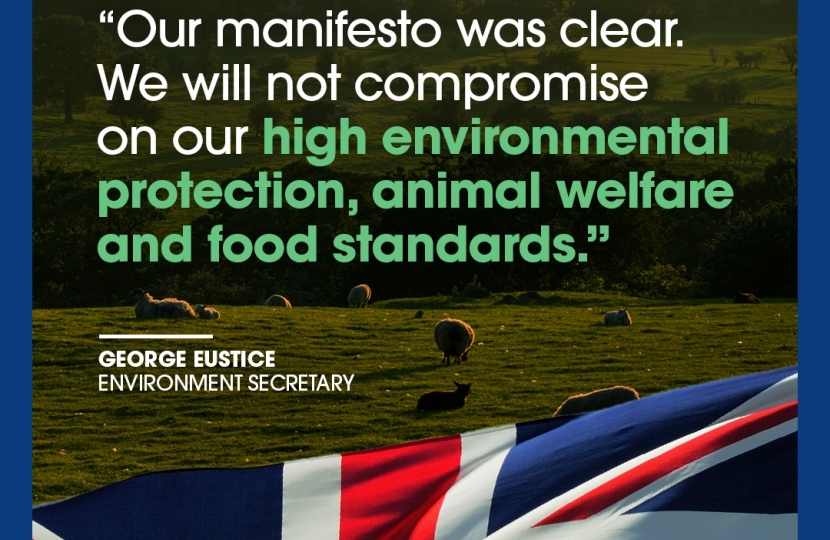 I recognise that there has been much publicity on this matter, promoted by celebrity chefs and others.

Many, like me, are concerned about food safety, animal welfare and environmental protection.

The Government stands by the unequivocal commitment in the Conservative manifesto not to compromise on our high standards in these areas in all our trade negotiations. It set up the Trade and Agriculture Commission on 10th July to advise on maintaining these standards in upcoming trade deals. The Commission is an expert representative body which will drive a positive agenda for the agriculture sector. It comprises of members drawn from retailers, farming unions, hospitality and environmental bodies and those representing consumers.

Our current food safety standards are enshrined in UK law and are some of the strongest in the world. They are upheld robustly by the independent Food Standards Agency. The law regarding food standards applies, and will continue to apply, to domestic food production but also to all imports, whether or not they occur via a trade deal. It will, for example, continue to prevent the importation of foods such as chlorine washed chicken and meat produced using artificial growth hormones. Any changes to this legislation would need to be brought before Parliament and be voted upon. No Government can legally tie a future Government’s hands, but I would not support any change in food safety legislation such as this and it seems very unlikely to me that any Government would propose doing so. Ministers have made the position of the current Government, regarding the continuation of these bans in UK law, very clear.

Therefore, much of the political comment on food standards has, I am afraid, been very misinformed, whether deliberately or otherwise.

With regard to animal welfare and sustainable food production, I believe that we need to maintain and improve our domestic standards and encourage countries around the world to follow our lead.

Leaving the EU means the UK is leaving the EU's Common Agricultural Policy (CAP). The Agriculture Bill provides the legislative framework for replacement agricultural support schemes. It provides a range of powers to implement new approaches to farm payments and land management. In England, farmers will be paid to produce ‘public goods’ such as environmental or animal welfare improvements.

The Bill also includes wider measures, including on improving fairness in the agricultural supply chain and on the operation of agricultural markets.

The difficulty with the Lords amendment on food import standards (and similar amendments before it) is that it would create a potentially vast set of often unachievable conditions applicable to imports, but only in relation to countries with which any future trade deals are struck. This would have the effect of:

(a) Severely disrupting the supply of certain products we already deem it appropriate to import, including from the EU, where in many areas our animal welfare standards far exceed theirs (e.g. on cows’ bedding, sow stalls, and the permitted number of broiler chickens per square metre), and, for example, where forcing our land management regulations upon them (eg. the rules on the burning of heather or grass) might be inappropriate. This would ultimately push up food prices for British consumers also.

(b) Affecting UK exports to countries where we have not yet signed a continuity agreement. The extra conditions within the amendments would be likely to result in some countries refusing to roll them over. For example, this would risk whisky exports worth £577m a year (eg. to Canada). Another example is the impact it would have on our potato farmers – 22% of UK potato exports go to those countries with whom an agreement has yet to be signed (eg. those worth £30m which go to Egypt). It would also threaten milk powder exports worth £21m to Algeria.

(c) Being a disincentive to striking brand new trade deals, which if agreed, could bring many opportunities for British farmers. We would in effect have be telling other countries how to conduct their affairs at a time when we are asking the EU not to insist on how we conduct our own, within any EU trade deal.

(d) Being a measure impossible for our country to monitor or police abroad.

(e) Creating new trade barriers with developing countries and Commonwealth partners whose economies we have been seeking to help grow:

(i) Introducing the validation infrastructure and processes required to verify UK production standards would adversely impact upon the economic wellbeing of many farmers in such countries.

(ii) It would not make sense to require trading partners with certain climates or environments to meet UK requirements on nitrate vulnerable zones - which are adapted to UK conditions – nor on water conservation or environmental noise. It would also be entirely impractical to expect some developing countries to meet UK carbon emissions targets at this point in time.

(iii) Access to UK markets is key to lifting millions out of extreme poverty in these countries.

Currently, we import food from countries such as Canada, Japan and South Africa under preference in existing free trade agreements, and none of these agreements include the requirements that the Lords amendment was seeking. In fact, nowhere else around the world do existing trade agreements include a requirement for partner countries to produce to another country’s domestic regulations and standards and it is difficult to see how such an approach could meet WTO rules.

Being in a position to strike new trade deals is important. For example, an agreement with the US could remove tariffs of up to 26% on British beef, a market only recently re-opened (following a ban many years ago relating to BSE), and estimated to be worth £66m to UK farmers over the next 5 years. It could do the same for lamb. It is not well understood that the US are the second largest importers of lamb in the world and even a 3% market share could boost annual UK exports by £18m. That is why, the CEO of the National Sheep Association says a USFTA “would benefit sheep farmers in all parts of Great Britain.”

Trade also improves farming resilience. It is vital for carcass balancing - the ability to sell cuts not wanted in the UK - and to deal with demand shocks and seasonal availability. Trade agreements will help and enhance UK farmers’ access to new markets, boost productivity and generate valuable new opportunities.

The Government will continue to examine options around labelling and better consumer information, including voluntary animal welfare assurance schemes and Government backed labelling, as well as work across the globe to enhance welfare standards through bilateral promotion with trade partners and advocacy of animal welfare and environmental issues in the World Trade Organization (WTO) and World Organisation for Animal Health (OIE).

British consumers want high welfare produce – and if our trading partners want to break into the UK market, they should expect to meet those standards. The Government will stand firm in trade negotiations to ensure any deals live up to the values of our farmers and consumers, and will always ensure that UK free trade agreements are fair and reciprocal. British farmers will not face unbalanced competition.

In summary therefore, the aims behind the Lords amendment and similar before it, are fully aligned with those of the government, but placing requirements in law is not the appropriate vehicle to achieve them in practice. The Government will not sign a trade deal that will compromise on our high environmental protection, animal welfare and food standards.