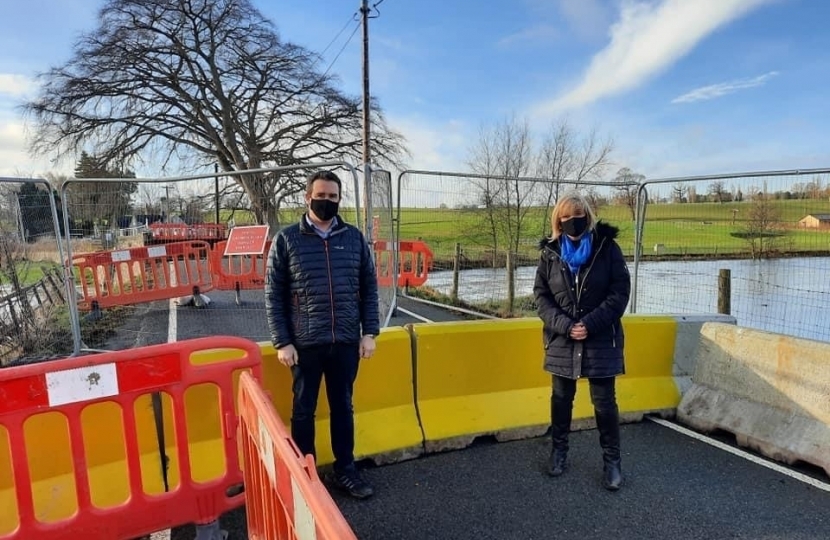 Having raised the plight of Llanerch Bridge in Parliament and with the Welsh Government since its collapse in January, Vale of Clwyd MP Dr James Davies has welcomed today's news that Denbighshire County Council's Cabinet has agreed to support the principle of replacing the bridge.

The bridge, which was built in the 1800s and linked Trefnant and Tremeirchion, collapsed and was washed away during Storm Christoph at the start of the year.

Shortly after the collapse, James visited the site with Tremeirchion ward county councillor Christine Marston and Cabinet lead member for Waste, Transport and the Environment, Cllr Brian Jones and spoke to the Senior Bridge Engineer at Denbighshire County Council about a replacement.

He also liaised with the Welsh Government’s historic environment service, CADW, in a bid to facilitate the best way forward, and raised the matter with the UK Government minister with responsibility for floods, Rebecca Pow.

He is therefore delighted that during today's meeting of Denbighshire's Cabinet, it was agreed to support the principle of replacing the bridge, subject to securing the necessary funding.

Commenting on the decision, James said:

"This historic bridge was much loved by the local community and is greatly missed.

"The residents have already been inconvenienced by its loss for 11 months, so a replacement is much needed.

"It was feared by some that it would not be replaced. Therefore I am extremely pleased by today's decision by Denbighshire's Cabinet. I do recognise however that many will feel the process so far has been incredibly slow.

"I will now contact Denbighshire County Council to arrange a meeting with the relevant officer to discuss next steps.

"It is vital that the funding is secured quickly so that work can begin on sympathetically reinstating this crossing and I will be doing everything I can to assist in the process."

Vale of Clwyd MP Dr James Davies has called for equality of healthcare across Britain, highlighting in Parliament last week the plight of a constituent who had been asked to wait eight weeks for an urgent appointment at her local breast clinic, compared to the largely-achieved two week "suspected