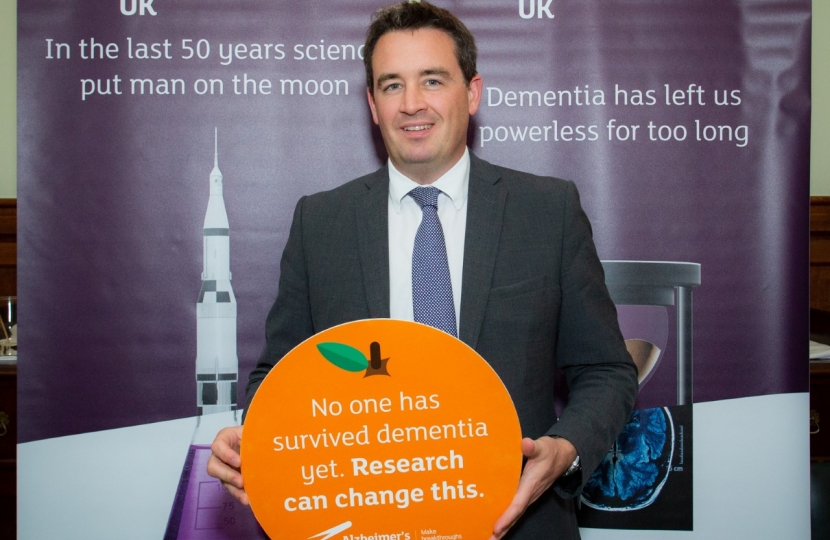 The aim of the event was to highlight the importance of the Government’s manifesto promise to double funding for dementia research, known as the Dementia Moonshot.

In the UK nearly 1 million people are living with dementia, and it is one of the leading causes of death. We all know someone affected by dementia. It can have a devastating impact on individuals and their loved ones.

Not only does dementia cause harm and heartbreak to millions of families, but it is also placing huge strain on our health and social care system. The economic cost to the UK of caring for people with dementia is estimated to grow from £24bn in 2014 to £59bn by 2050.

James, a former clinical champion for dementia, was one of many MPs to meet with representatives from Alzheimer’s Research UK, the country’s leading dementia research charity, as well as people impacted by the condition

“I was delighted to join Alzheimer’s Research UK to show my support for their work to help find preventions, treatments and, one day, a cure for dementia.

“An estimated 1,113 people are living with dementia in the Vale of Clwyd, bringing a devastating impact to many families.

“It is vital that we increase investment in dementia research to help make the progress needed to end the fear, harm and heartbreak caused by dementia.”

David Thomas, Head of Policy at Alzheimer’s Research UK, added: “A big thank you to James for taking the time to join us and support dementia research during World Alzheimer’s Month.

“Dementia is one of the biggest global health crises we face. In 2019, the government made a manifesto promise to double funding for dementia research to £160m a year and speed up progress in clinical trials. Now is the time to deliver on this pledge.

“The response to COVID-19 has shown us what science can achieve with increased investment and momentum. And we’re confident that, with the right support, we can make the life-changing breakthroughs that are so needed for people with dementia.”