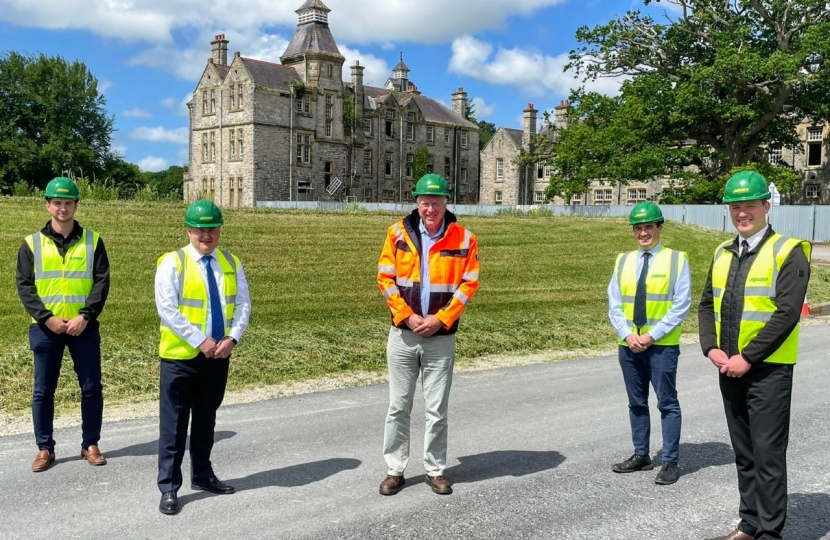 Earlier this year, after visiting the site, James spoke of his support for the plans, which include the building of 300 new homes and facilities for local businesses, shops and leisure. He is therefore pleased that planning approval has been granted.

“The former North Wales Hospital site is very important to the town of Denbigh and it has been sad to see it repeatedly targeted by vandals since its closure as a psychiatric hospital in 1995.

“This planning approval should not only ensure that the site and its buildings are safeguarded; it will also provide valuable jobs in Denbigh for the next ten years and at the same time provide the area with much-needed high quality housing.

“Clearly there will always be concerns regarding a development of this scale and I appreciate the reservations that some residents and local councillors have regarding certain aspects of the plans.

“However it must be stressed that planning approval remains subject to a Section 106 Agreement to be signed by Jones Bros and the Council, which will place conditions on the development.

“It must also be stressed that this is very much a phased project.

“What people should not lose sight of is the fact that this project will boost the local economy by £75 million and create 1,200 much needed jobs in the area.

“I thank Jones Bros and Denbighshire County Council for providing this opportunity to transform this Denbigh landmark and look forward to watching the development over the next 10 years.”