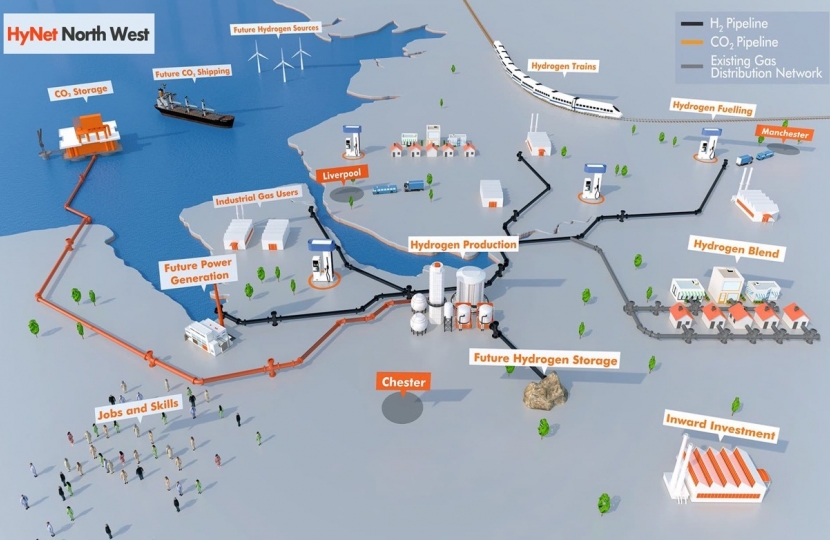 Vale of Clwyd MP Dr James Davies has welcomed £72m of funding which will accelerate clean energy production in North Wales and the North West of England.

The funding, which will be directed to ‘HyNet’ will help progress plans to produce hydrogen from natural gas at Stanlow, with Carbon Capture and Storage off the North Wales coast in former oil and gas fields. When operational, the energy produced will be used widely in the region, including in industry, to power public transport and domestically.

As part of the Industrial Decarbonisation Challenge fund, £171m has been distributed to nine green technology projects throughout the UK. HyNet North West will receive £33m from the IDC fund and a further £39m of consortium partner contribution.

Officers of the Mersey Dee North Wales APPG, which James Chairs, had previously contacted the Secretary of State for Business, Energy and Industrial Strategy to encourage investment in HyNet. The project had also been raised in the House of Commons Chamber on several occasions. This week’s announced funding addresses a key priority in the Mersey Dee Alliance Fiscal Stimulus package which focuses on the decarbonisation of industry.

The HyNet North West Project can now expect a Final Investment Decision by 2023 and should become operational by 2025. In total, this work will reduce carbon dioxide emissions by 10 million tonnes per year by 2030, at which point, the HyNet geography will become a low carbon industrial cluster.

The project is expected to create up to 6,000 new jobs as well as retaining high skilled manufacturing roles.

“This funding will help secure our region’s position as a national leader in clean energy innovation. I look forward to seeing the HyNet project progress in the years ahead as the UK moves towards net-zero carbon emissions.”