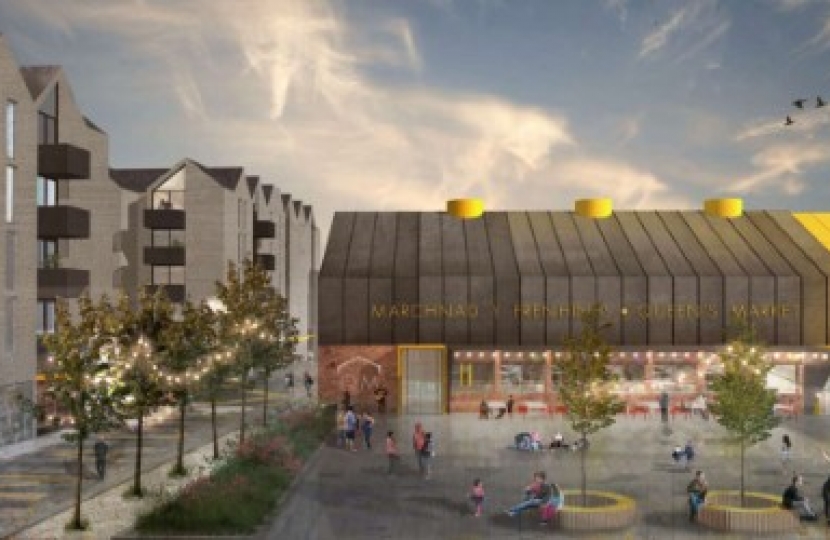 Speaking in the House of Commons this week, Vale of Clwyd MP Dr James Davies called on the Secretary of State for Communities and Local Government, Robert Jenrick MP, to commit to exploring funding opportunities to help the redevelopment of Rhyl’s Queen’s Market.

James, who has supported the ambitious plans for the town centre landmark since they were first mooted, made the request when questioning the Secretary of State over support for towns during yesterday’s proceedings in Parliament.

During an urgent question on Towns Fund, he said:

“The Towns Fund is, of course, an England-only fund, but the Government’s levelling-up agenda means supporting towns right across the UK, including Rhyl in my constituency.

“Will my right hon. Friend commit to exploring opportunities for the shared prosperity fund and other sources of financial assistance to help redevelop Rhyl’s Queen’s Market?”

In his response, the Minister told James that as the Government designs the UK’s Shared Prosperity Fund and brings it to fruition in the early part of next year, he will certainly be listening to the calls of James and his colleagues in Wales.

Speaking after the exchange, James said:

“The redevelopment of Rhyl’s Queen’s Market has generated excitement in the town, with locals recognising the huge potential it has to give Rhyl town centre the boost it desperately needs.

“However, It is an extremely ambitious scheme and therefore the final costs will be substantial. I am extremely pleased that the Minister has agreed to consider assisting us with this.”