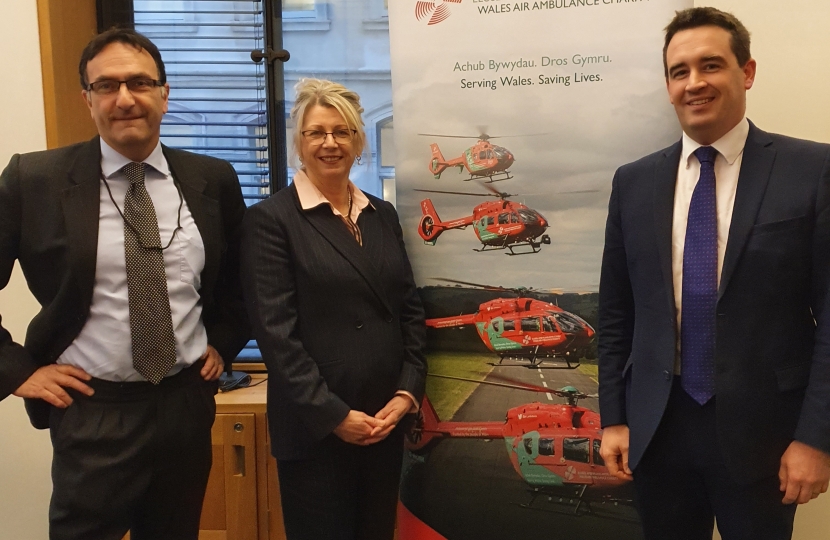 Vale of Clwyd MP Dr James Davies is calling on people in the area to consider supporting the Wales Air Ambulance after attending an event in Parliament where he learnt more about the work of the life saving charity.

The Wales Air Ambulance has been providing air cover to relieve illness and injury across Wales since 2001.

They are the only air ambulance charity based in, and dedicated to, Wales.

At the event in Parliament, James was told that the charity carried out 290 life or limb threatening missions in Denbighshire between November 1st 2018 and October 31st 2021, and that they rely entirely on donations to raise the £8 million needed each year to maintain their 24/7 helicopter operation.

James is therefore appealing to people in the area to consider supporting the work they do, by either donating or signing up to take part in their lottery.

“Wales Air Ambulance covers the whole of Wales every single day, covering rural countryside, towns and cities, along the Welsh coastline and across vast mountain ranges.

“Their four airbase operations, including in Caernarfon and Welshpool, are ready to save lives wherever needed.

“Thanks to the public's generosity, the charity now provides a 24-hour operation so they can help people both day and night, and they continually strive for an outstanding air ambulance service available to everyone across Wales.

“However, in order to continue providing such an incredible service, it is vital that people keep supporting the charity, and in light of all the people it has already helped in Denbighshire, I urge people to donate.”

For further information on the Wales Air Ambulance or to find out how you can support the charity, click on the link below: